Most famous for The Starry Night Vincent Van Gogh became a very influential figure in Western art. Although he was a very accomplished artist, he did not gain notoriety until his death in 1890. Van Gogh suffered from mental illness and died due to gunshot wounds from a  7mm pocket revolver. 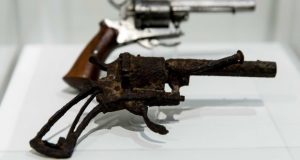 There are some conflicting elements surrounding Van Gogh’s death which have led historians to question whether he committed suicide or was murdered. Some historians believe he did not commit suicide but, was shot by a group of teenage bullies. Van Gogh as shot in the midsection which isn’t typically a place that someone would shoot themselves. Van Gogh also had a letter in his pocket, at the time of his death, which was addressed to his brother. The letter was not a suicide note but a casual letter to send to a sibling.

This revolver was discovered in the 1960s in the northern French village of Auvers-sur-Oise, the same place he was shot. It is believed to be the gun that killed Van Gogh because it is the same caliber as the bullet that was retrieved from his body.

The gun is set to be put up for auction, by Paris auction house AuctionArt, this coming June 19th.

The revolver is projected to be auctioned at around 67,000 dollars.