Bidder’s Choice: What Does it Mean? Skip to Content 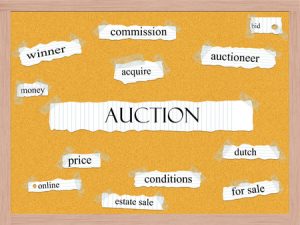 Whether you’re a seasoned veteran or just a beginner, everyone can agree that the extensive vocabulary you hear at an auction can be a little overwhelming. Between the statement, the hammer and the rhythmic chant, there’s a lot to take in, but it’s “bidder’s choice” that quite possibly could be the most essential term you should know.

So what does bidder’s choice really mean?

Bidder’s choice is a grouping strategy that both benefit the auctioneer and the buyers. Let’s take, for example, a grouping of power tools. Depending on the value of those separate items, the auctioneer may start the first round with one tool that’s worth more, or they may leave the parameters open and say any tool on the floor is available for buying.

The bidder with the highest unchallenged bid has the right to choose as many tools at that price as they wish. After they’ve made their selection, another round of bidding commences with the same rules applied. This process continues until only a few items are left or the bids are getting very low. Towards the end, the auctioneer may choose to group the rest of the tools together.

What’s the point of bidder’s choice?

This complex process gives buyers the chance to claim specific assets they were set out to buy, as well as give other buyers a second chance to bid on the other items during the later rounds. This is a fair way to give auction goers a good deal as well as some healthy competition. Also, auctioning these items separately is more profitable for the auctioneer than selling the items as a whole, usually losing them money in the end.

Smith & Co. Auction & Realty holds 60-80 live auctions a year for you to test your bidder’s choice at and get exactly what you’re looking for. Be sure to check out our list of upcoming auctions and best of luck!